A PHP Error was encountered

Message: Non-static method Antenna::usage() should not be called statically, assuming $this from incompatible context 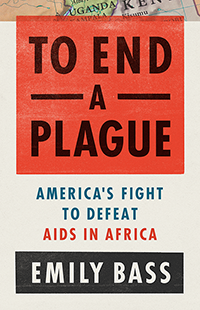 To End a Plague is not merely the definitive history of this extraordinary program; it traces the lives of the activists who first impelled President Bush to take action, and later sought to prevent AIDS deaths at the whims of American politics. Moving from raucous street protests, to the marbled halls of Washington, and the clinics and homes where Ugandan people living with HIV fight to survive, it reveals an America that was once capable of real and meaningful change—and illuminates imperatives for future pandemic wars. Exhaustively researched and vividly written, this is the true story of America’s last moonshot.

Emily Bass has spent twenty years as a journalist and activist focused on AIDS in Africa and American foreign aid. Her articles and essays have appeared in numerous books and publications including The Lancet, Esquire and n+1, and received notable mention in Best American Essays. She is the recipient of a Fulbright journalism fellowship and is the 2018-2019 Martin Duberman Visiting Research Scholar at the New York Public Library. She lives in Brooklyn.

Prior to her work in Uganda, she headed up/collaborated on reproductive health/family planning projects in multiple countries, including Brazil, Thailand, Niger and Zaire (now the Demographic Republic of Congo); and fulfilled extensive consultancies for USAID and the World Bank in Egypt, Morocco and Mozambique.

Dr. Wawer was first asked to go to Uganda in 1987, to meet with Drs. David Serwadda and Nelson Sewankambo.  Together, they established a population-based cohort study in the Rakai Region of south-central Uganda; that study served as the basis for what became the Rakai Health Sciences Program (RHSP); th latter has secured multiple grant from the NIH, the Bill and Melinda Gates Foundation, and multiple other donors..  In the intervening 34 years, Maria has collaborated with her RHSP colleagues on multiple HIV prevention randomized controlled trials, as well as on extensive HIV-related epidemiological studies and on assessments of HIV clinical services.  Data from these studies have contributed to global HIV prevention efforts and have documented how Combined HIV Interventions, including Treatment as Prevention and Voluntary Medical Male Circumcision, have resulted in reduced rates of new HIV infections at the population level.

Larry William Chang, MD, MPH is an Associate Professor of Medicine, Epidemiology, and International Health. In 1999, Dr. Chang began his experiences with HIV research in Africa, first in Ghana then Kenya and, beginning in 2005, in Uganda where he is currently a Senior Investigator with the Rakai Health Sciences Program and Co-Principal Investigator of the Rakai Community Cohort Study. In Baltimore, Dr. Chang is an active physician with the Johns Hopkins Bartlett Specialty Practice and on the Polk service, a multidisciplinary HIV and infectious diseases inpatient unit. Dr. Chang’s research focuses on leveraging implementation science, applied epidemiology, community health workers, and mobile technologies, to improve treatment and prevention for HIV. Dr. Chang is also Director of the Inter-Center for AIDS Research (CFAR) Sub-Saharan African Working Group.